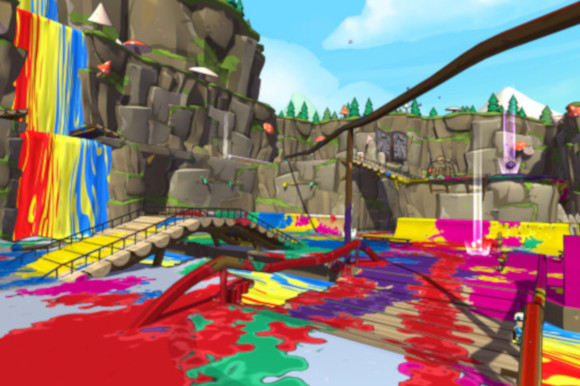 We don't often review games at Surrey Mummy but our little people are very much into them, so when we heard about Crayola Scoot and how it is heralded as 'a non-violent old school co-operative game' our heads were turned. With mum and dad being fans of Tony Hawk's Pro Skater games back in the day, it was definitely worth a look.

Scoot is Crayola’s first video game in 14 years. The idea is to get the whole family together on the sofa to beat the Scoot Legends in a rainbow of exciting events like Splatter Tag, Trick Run, and S.C.O.O.T. To translate, you splash paint around the place whilst performing cool skating tricks in a multitude of different theme parks. Being 'old school' about our games, we liked the sound of that.

The idea is simple and easily grasped by all of the family, being to work your way up through the ranks and win the 'Colour Cup'. But even if the less able (poor old mum in our case) didn't win any gold stars they are still able to progress with the game along with the others rather than get knocked out.

The different worlds and modes helped to keep the game fresh and retain everyone's interest. Our children loved the fact that at every level you can win a cup and enjoyed the 'teleportation' to different worlds. Our ten year old daughter was particuarly taken by the fact that your characters hair coordinates with the colour of paint you are using, so there is something for everyone.

We would recommend this game because it's simple to play and gave us fun family time in one room, all doing the same thing. Crayola Scoot is now available in the UK for PlayStation®4, Xbox One™, Nintendo Switch™ and PC for £34.99. Boxed copies are available now from Amazon, Game, and many more. Crayola Scoot is published by Outright Games and developed by Climax Studios.