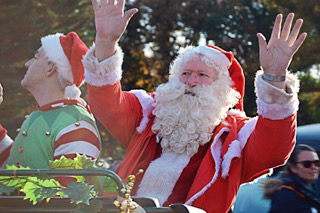 Santa was busy whizzing around several Squire’s Garden Centres last weekend to open his magical Christmas Grottos. Hundreds of people came to cheer him as he arrived. Instead of flying in on his traditional sleigh he kept to the roads with some pretty unusual forms of transport, including an American classic car, horse drawn carriage, vintage fire engine, and even the Bumblebee car fromTransformers! There’s a great choice of grottos to visit Santawhich on Saturdays and Sundays throughout December.. As well as seeing your child’s face light when they see Santa and receive a beautiful wrapped gift, you’ll also get a warm glow, as you’ll be benefitting a local charity.

Tickets cost £6 per child, with £1 from every ticket being donated to Squire’s local charities. There’s no need to book, simply turn up on the day. For full opening times seewww.squiresgardencentres.co.uk.